Trademark was our first and very much loved dear first stud male who proved to be a fantastic foundation male for us, consistently producing cria that were fine and lustrous. With great regret and sadness he pased away in the winter of 2011. We leave this shot here in his honour.

Donaldo is our most prestigous elite stud male. He is consistently producing cria with stunning greasy lustrous fleeces. Donaldo is not currently available for outside stud services.

We just love this shot, it shows off Donaldo's beautiful suri head to perfection. We purchased Donaldo for his density,uniformity, conformation and sensational suri appearance.
(photo courtesy F.Vanderbeek)

We co-own Donaldo with Ian and Angela Preuss of Surilana. Donaldo is a stunning solid white suri male who had a very impressive showring career in both animal and fleece classes. This pic was taken in 2011. We just cant help but waste time admiring him!!

Excalibar is the patriarch of the Shangrilah stud male line up .This shot was taken in 2011.We are very pleased with how consistently he is producing cria with good cover and exceptionally lustrous and fine fleeces that stay fine.

Excalibar is now in his senior years but still loves to work and does so enthusiastically. In his younger years he achieved a number of awards including a supreme champion. His micron in 2012 at 15 years of age was an amazing 23.9 and SD 5. 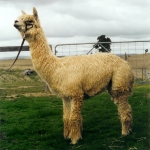 Excalibar is out of Peruvian Senator and Peruvian Summer Haze, a classic suri combination. Although these genetics would be considered "old" by some we still think they have a tremendous amount to offer. The progeny Excal is giving us is clear evidence of this.

We just love Moonies proud macho stance and presence.This shot was taken in the winter of 2011.

Moonie is now 11 years old and still has independant and lustrous locks. Although he has never been fine, he has produced progeny that are and some that also stay fine.As big as he is, he is just a teddy bear underneath, as long as you are not another stud male!!

Knight is our latest inclusion to the Shangrilah stable of white suri stud males. We could not resist his superb conformation, density, and cover. His sire is Pucaro Allegro and his dam Windsong Valley Andean Charm. Knight is co owned with GrayLeigh Alpacas.

We now have our first Knight cria on the ground and are quite pleased with the results and looking forward to more in the autumn of 2014.

Knight is one of our herd sires and has grown out into a stocky, strong framed male with very good density and lustre. He was awarded a number of ribbons as a junior and intermediate and came 2nd in class in this fleece at the 2012 Ekka (Qld Royal)

Duke is the latest addition to our stable of white suri stud males.His sire is Pperuvian Amador and his dam Ridge Gully Allian,a female line with very uncommon genetics and very fine fleeces.

Duke is still looking good at nearly 12 years of age and his fleece still demonstrates a high degree of lustre and independant locking. In his early years he had a successful show career including champion ribbons.

Macca as we affectionately call him, is in our co owned Alcazar Suri herd and jointly owned with Ian and Fiona Vanderbeek. Pictured with his breeder, Angela Preuss, Mister Macusani was the 2008 National Intermediate male champion.

We are pleased with what Macca is doing in our herds and his progeny are typically inheriting his greasy lustre. We only put Macca over pure suri girls in the Shangrilah herd as well as Alcazar girls. Macca is not available for outside stud duties.

Domingo is in our jointly owned Alcazar Suri Stud herd. His sire is Surilana Icalon and his dam Bella Vista Katherine, a Kingston daughter.

Don Dante is in the Alcazar herd and his dam is Alcazar Diva S16, a Moonflute daughter, she and Donaldo did very well together in producing this boy.

The picture does not show up the lustre that is there well but we are very pleased with Don Dante's development all round. He has a who's who collection of prestigious genetics behind him.