Alpacas originated in South America, and are found mainly in Peru but also Bolivia and Chile. They belong to the family of camelids, as do llama, guanaco, vicuna and both types of camel. Alpaca where domesticated by the Incas and suri fleece was seen as so precious, it was reserved for Incan royalty. Suri fleece remains an elite fibre; a good suri fleece is noted for its wonderful lustrous silky, soft handle and appearance.

Alpacas were first introduced into Australia in the 1800's, however that attempt was not successful and they were reintroduced in the late 1980's. Their numbers have continued to grow since that time and there are now well over 100,000 alpacas in Australia. During this time there have been great gains in the quality of animal being bred and Australian genetics are now sought after internationally. Although the industry to date has largely focused on the establishment of stud stock, it is primarily a fibre industry and alpaca fleece is very luxurious and used for high end fashion garments and homewares. Stronger micron fleeces are now also being utilised in the carpet industry. Alpaca fleece is well known and regarded for its thermal properties. Therefore it is much lighter to wear than other sources of wool but remains incredibly warm. It is also excellent for people that find other types of wool too prickly to wear as alpaca fleece is much softer, for example: a 20 micron alpaca fleece is nearer a 15 micron sheep fleece.

Additionally, the last few years has seen the establishment of an alpaca meat enterprise. They are also used (generally wethers) as herd guardians for other enterprises such as sheep, where they do an excellent job at bonding with and protecting their herd from predators. Alpacas also make ideal pets and are generally easy to care for.

Alpacas are being farmed in all states and areas of Australia now, with the exception of the Northern Territory; however they are most suited to tableland areas with a temperate to cool climate. Having said that, many are breeding them successfully in more humid tropical environments. They must be shorn annually before the worst of summer heat as they can suffer heat stress. We fortunately have not experienced this but always do ensure our herd have access to clean drinking water, shade and are shorn in spring. They are generally hardy in inclement weather and tree cover will suffice, but should have shelters erected that they can access in cold, windy wet weather. Frosty nights do not bother them; after all, coming from the Andes, our frosty nights are far less comparatively in both frequency and intensity.

Alpacas are highly intelligent, inquisitive animals that are generally placid and a delight to mingle with. They have a reputation for spitting, but generally only do this to exert dominance or displeasure within the herd. They usually only spit at humans when feeling threatened, such as at shearing time where we always have towels on hand for the humans!

There are two types of alpaca: suri and huacaya with the only essential difference being in their fleece. Some people say suri are more flighty by nature but this has not been our experience, in fact we have generally speaking found our suri animals to be friendlier in nature than our huacaya. Some also say that suri do not do as well in colder areas, once again this has not been our experience (we sometimes have periods in winter that average -8C overnight) and we find both breeds do not differ in their husbandry and care. Suri do however have a higher level of vulnerability to cold wet windy weather, as their fleece hangs from the midline, this exposes the top of their bodies to heat loss, however as long as they have access to shelter sheds in that type of weather, which huacayas also seek in bad weather, there should be no problems. And of course both types need access to shelter if the weather turns bad straight after shearing. 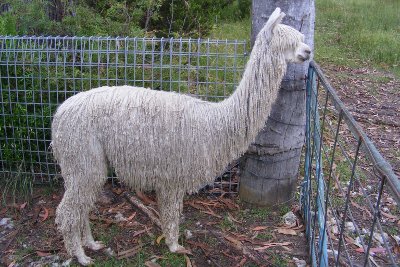 Suri - Suri fleece hangs from the midline of the back in a manner akin to dreadlocks, similar to angora goats. 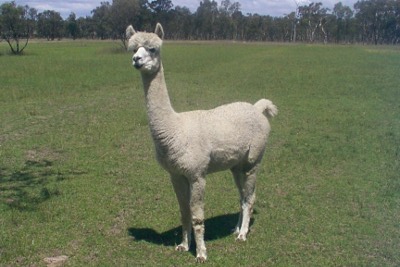 Huacaya - Huacya fleece grows outwards from the body like sheep wool does.

Alpacas are the most environmentally friendly livestock in Autralia at present, they utilise available feed better than other livestock and thanks to their soft padded feet do not compact the soil like other livestock. They are semi browsers, which means they do eat a variety of vegetable matter i.e. pasture and some shrubs and trees, but do not browse to the extreme of a goat.

Alpacas come in a huge variety of natural colours - white, fawn, brown, grey and black; with many variations of these colours.

They are much less labour intensive than sheep and far easier to handle than cattle or goats, making them ideal for woman to manage. Shearing is the biggest annual task of the year and they require vaccination twice a year and periodocal nail trimming. They also require routine husbandry such as drenching for worms when required and in areas with ticks ( we do not have this problem) preventative measures will need to be taken. We have also found they do not rub and push against fencing as other animals do.

If you are thinking about alpacas, we would encourage you to attend one of many introductory workshops that are held periodically in various areas and visit and speak with as many breeders as possible. Most alpaca breeders are only too willing to assist and advise newcomers and we at Shangrilah are open to enquiries of any nature at any time.

AAA: Australian Alpaca Association, one of several alpaca organisations in Australia but the AAA is the primary body and with whom most breeders register their animals. It should be noted that very few breeders would buy animals that are not registered with the AAA.

AGE: Across Herd Genetic Evaluation programme developed and managed by the AAA. Participating breeders submit annual returns on data for each individual animal included in the programme. This data includes things such as fleece statistics ( micron, weight, standard deviation etc) and other data such as animal weight, fleece cover and certain conformity traits. It not only allows breeders to objectively measure progress toward desired goals within their own herd, but allows breeders to also gain objective measure against other herds and gain breeding values for each of their participating animals.

CRIA: a baby alpaca up to 6 months old.

HUACAYA: (pronounced wa-ky-ah) an alpaca with fleece akin to a sheep and the most common type seen.

MICRON: unit of measurement for determining fleece diameter and therefore fineness of the fleece.

Q ALPACA: a biosecurity programme managed and administered by the AAA.

SPIT OFF: process whereby stud male is taken to breeding aged females to ascertain their pregnancy status. Female will generally spit at and run away from a male if they are pregnant and sit for mating if they are not. Although this process is reasonably reliable, an ultrasound is the only way to obtain a pregnancy guarantee.

SURI: an alpaca with flowing long locks hanging from the midline - the Rastafarians of the alpaca world.