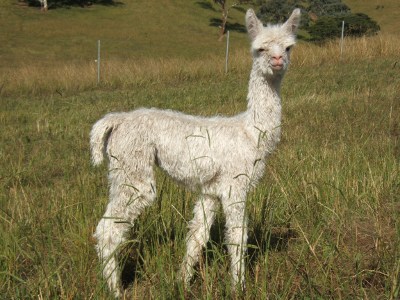 Alcazar Suri Stud was established in 1999 by Pierre Baychelier and Brenton Spehr. From small beginnings, they developed the herd into a respected and admired stud that specialises in white suri. Keeping the Suri Pure® has been their motto and indeed they have made tremendous gains in achieving this goal, with 6th generation suris now part of the herd. Additionally, Brenton and Pierre have also well and truly achieved their other objectives, of breeding white suri, with a focus on density, lustre, handle and conformation. The first time we saw the Alcazar herd, we were blown away by the overall beautiful robust frames and excellent conformation of the animals in the herd. And that was before we had the pleasure of seeing some of their fleeces up close!

Pierre and Brenton have made a significant and successful contribution to the growth and genetic improvement of white suri in Australia, along with their contribution to the suri breed generally, through Keeping the Suri Pure®. We congratulate them on their superb achievements and hold high admiration and respect for the work they have done with the Alcazar herd. 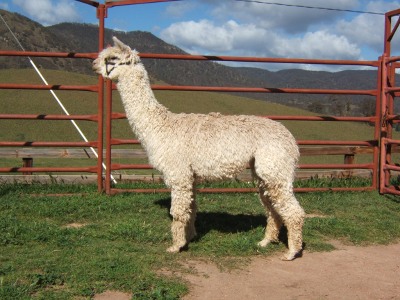 We are now very proud and overwhelmingly delighted to be able to say that, in partnership, we now own and jointly operate the Alcazar Suri Stud, with Ian and Fiona Vanderbeek of Birrong Suri Alpacas.

We are in no doubt about the potential of this partnership and the opportunity it gives us all. We believe the synergy created through the combined forces of the Birrong, Alcazar and Shangrilah Studs, stands us in good stead for an optimistic and exciting future. All 3 studs are complementary to each other and through the Alcazar partnership, all 3 studs will reap the benefits of a very impressive collective of stud males.

We are proud and honoured to have been entrusted with the Alcazar herd and its legacy.

And we are also proud and honoured to have entered into partnership with Fiona and Ian, people we hold in high regard and with great respect. Through our shared passion for white suri and the ongoing genetic enhancement of the suri breed, the partnership in Alcazar allows us to all pool our energies to further consolidate the work undertaken by Pierre and Brenton, now that the time is right for them to pass this work onto someone else.

The fusion of Alcazar, Birrong and Shangrilah Suri studs holds great promise for an exciting future.

Whilst the Shangrilah and Birrong Studs will remain autonomous and continue to operate as they are presently, the Alcazar Suri Stud will now be jointly managed and operated by both the Vanderbeeks and us. Some of the herd will reside in the Southern Highlands of NSW at Birrong, and the remainder will reside here with us at Shangrilah in the NSW Northern Tablelands. Alcazar Stud males will move between both properties.

The Alcazar web site address will remain the same and the site will be updated over coming months. Please find links to the Alcazar site on our links page and at the bottom of this page.

The Alcazar Suri Stud will continue to specialise in pure bred white suri, with a focus on animals with high quality fleeces and sound, strong conformation and bone. Together with the Vanderbeeks, we will build on the exemplary foundations laid down by Brenton and Pierre in Keeping the Suri Pure®, and in doing so, maintain the Alcazar principle of contributing to the conservation of the rare suri breed.

The suri photos and slideshow on this page are all of animals from the Alcazar herd, courtesy of Brenton Spehr and Pierre Baychelier.